THE FIRST BREATH OF FALL 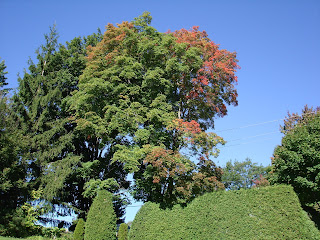 My Corona tidy-up so far has consisted in going through many of my notebooks. Wow! What riches! What treasures! (Yes, sometimes I surprise myself ;-) Plenty of words, ideas and inspirations dwell therein.

Also, many poems, not all of which are in my 'Poems' folder on my computer. A while back I abandoned work on these in despair at the on-going revision work i.e. they're hardly ever finished, or brought to a satisfying realization. But they keep coming, so I gave in.

In order to switch away from typing, I decided to pick up my long-neglected water-colour painting. What emerged was an image that works as an illustration to a not-so-recent poem. But now, do you think I can find those lines?? Disappeared into the ether, friends.

Writing wisdom proclaims one has to write Xmany thousands of words before one finds one's voice. I'm sure I've written waaaay more than that. Result? I've found several different voices. No, I don't have a split personality. No more than other people born under the sign of Gemini anyhow.

But my notebooks are a mess. So now my task is to go through them again and make sure I add the words I've written to the relevant project. Hmm. Thinks... that'll be a good goal for the winter. Meanwhile, it's back to two on-going story discoveries!

Posted by Brenda at 7:53 AM No comments: