My husband and I were lucky enough to escape part of the cold and snowy March weather. We flew to Johannesburg where we spent the night with old friends from Cape Town days. They lent us a car and we headed north-west to Pilanesberg, a crater formed in very olden days by a long-extinct volcano. This is what the terrain looks like: 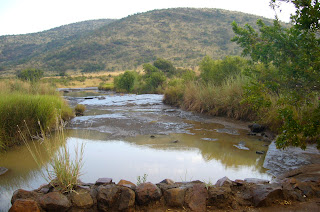 Beautiful, non? But a photo or even a film can never convey the slightly spicy smell of the earth, the gentle touch of the warm air.

We arrived at the game lodge a little before five p.m., a couple of hours later than we intended. The thing was, having studied the map, I decided we should take a slightly different route from that advised by our friends so we could go further on the M4 motorway. What I didn't realize was that, once the turn off to Sun City was passed, it turned into a toll road!

And I only had ten rands in cash... the equivalent of one dollar.

No worries, though, because as we drew up to the toll booth we saw that credit cards were accepted.

"Fifteen rands" said the slim black woman in the booth, holding out her hand.

My husband handed over his Visa. It didn't work. We suggested Mastercard, but she just shook her head and said, "Won't work."

Who knows why? Perhaps because the cards were from overseas??

Anyhow, there we were, pretty much stuck. I told her we had ten rands and my husband passed it over. She slipped out of the toll booth and addressed the vehicle drivers behind us. Because she was speaking in her own, African language, all we could understand was her calling out "Five rands."

But lo and behold, after three or four minutes, she returned, triumphant. Someone had donated us the bucks, worth of course more like $5 in South Africa.

So on we went, hitting a traffic jam in the busiest area of Rustenberg, a platinum mining town, where the roads were up because of the installation of a new transit system. Busses, taxis, people, roadside stalls... all very local and African. But we eventually arrived at Manyane resort.

We booked in and hastened to take a trip inside the gates of the game park. One of the first animals we saw was this delicate creature: 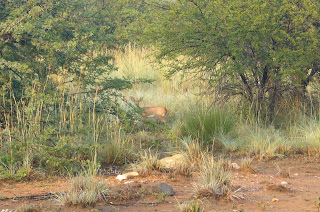 Being in a game park has an atmosphere of peace like nothing else on earth. Perhaps it's because the animals roam free and aren't under any sort of threat? Kind of like paradise? Anyhow, for my husband and I, being there was as if our souls sighed out a huge sigh of release and delight.

That evening we had the excitement of seeing two white lions. We came across some open Jeep-type Safari vehicles blocking the road. Clearly some siting was up. Only about fifteen feet ahead, a male lion strutted down the road, lay down and looked at the cars as if to say, "I'm king here. What are you going to do now?"

Unfortunately, it was getting close to 6.30 p.m., gate closing time, when we'd have to be out of the park. So the vehicles ahead inched forward. And as they did so, his lioness came bounding out of the grass and tackled the lion in exactly the same way that cats and kittens play.