Let's hang around Knysna for a little longer. It's such a beautiful spot in which to linger! So I want to start by sharing an event I participated in when I visited in December 2011, and then switch to a very first world experience.

But first, let's have some lunch together at the East Heads cafe. Um, did I mention that this environment is the setting for my romantic adventure 'Alexa's Quest'? Hopefully to be published before too long.

So here we go. What will you order, I wonder? There's always fresh fish of course, and babotie, but also vegetarian dishes, and such desserts as cheesecake and carrot cake which are likely to be the most delicious you've ever tasted!

Please, take a seat. You can sit in sunshine or in shadow. 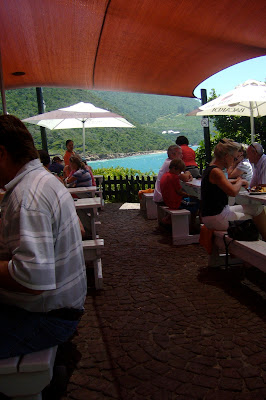 Did you enjoy that?

Now let's go to another event that featured delicious food. The venue was the kitchen at House Hammond. See the previous blog entry if that doesn't mean anything to you! 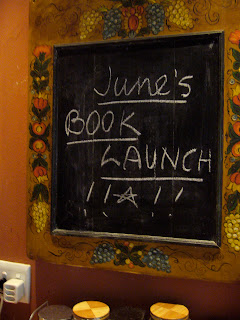 Yes, it's the launch of my cousin's book, a combination of memoir and recipes, guaranteed to delight both the imagination and your palate! Up till now, the book has only been available in South Africa, but since last month, you can download the eBook from Amazon. So check out
'PINK AND OTHER COLOURS'. Here's the link for you to buy it now!!: http://tinyurl.com/cdvdnv4

p.s. she truly has a most engaging and amusing writing style! And can't you just see that from this photo? 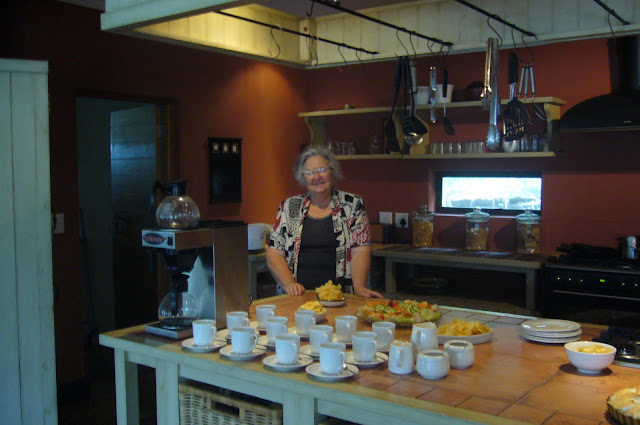 And here's Myrtle, who started her working life as a cook at the Pink Umbrella restaurant, went on to teach kindergarten, look after AIDS orphans and then became a town councillor. In the background you can see the open fireplaces, and the sliding doors onto the terrace. (Sigh!) 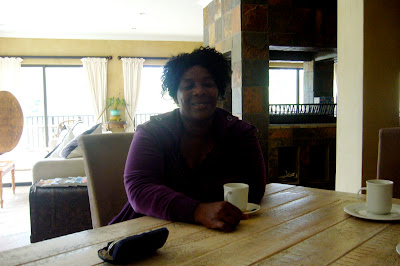 So now to the first world stuff. You see, when I visited at the time of the book launch, I went to my dad's dentist. Dr. Wiid built a beautiful bridge for me, and when my local dentist saw his excellent work and heard I'd be in Knysna again soon, she suggested he should do the crown I needed. I'll spare you the preliminary details which were quick and painless. But I wanted to share what happened then.
"Take a look," Dr. Wiid said, and brought me upright in the chair. To my left was a computer screen which showed an image of my upper jaw. To my surprise, he began to design the tooth, right there, before my eyes. I tell you, it was just like watching my talented son working on an ad image: make it bigger there, change the shape a little here, move this over to the left a bit... you get the picture.
Once he was satisfied with the shape, the look and the fit, the dentist said, "Okay. Come back in three quarters of an hour and I'll have it ready for you!"