When I was young, women's wisdom stated 'Never learn to type because you'll end up as a secretary and nothing more'. Yes, that was in the days when businessmen actually had secretaries. Nevertheless, having left the Royal Ballet School in June, I had months to while away before heading to the University of Cape Town at the end of February. So I spent three months learning to be a secretary and to touch-type. Boy, am I ever glad I did!

Believe it or not, the machines we learnt on in that secretarial college in downtown Johannesburg looked like this. 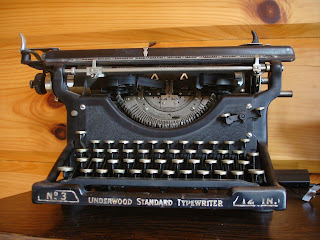 Also, we had a piece of green cloth covering the keyboard so we couldn't cheat by looking at the letters.

After twelve weeks I'd worked up to a decent speed and yes, I did spend a couple of years working as a secretary on and off. But I had no idea how thankful I'd be for typing skills when I became a writer!
My only regret is that I let my shorthand skills lapse. They would have come in handy when I attended workshops and lecture.

Anyhow, this is kind of by-the-way because what I want to do in this post is notify you of an upcoming hiatus. I'll be taking a technology break for at least the month of December, and plan to resume blogging around the middle of January. Hope to see you then!
Posted by Brenda at 8:14 AM