A milestone in my life (and raita recipe)

Hah! I did a typo and wrote milstone! But no, last night's reading was fun, and even more so because I wasn't alone. Ex-South African poet and author Meira Cook was with me. More on her in a minute. Anyhow, we agreed I should read first. No, I didn't pull the age card and say 'I'm older than you'. It somehow made sense because 'Cape Town' ends in early 1990, and her novel 'The House on Sugarbush Road' is set in post-apartheid Johannesburg, 1994.

I knew reading would put me slightly out of my comfort zone, so I decided to choose a passage where Renee, my seventeen-year-old heroine first steps out of hers. Although you might say she did this from the moment she stepped on the train that took her away from her country home into the city. After having been more or less ostracized at the ballet school, she agrees to go and have dinner at the home of Dion, a student of mixed-ethnicity who lives with his Aunt Rabia. It's a moment when she begins to be aware of injustices.

Here's a not-so-flattering photo to prove this event did actually happen: 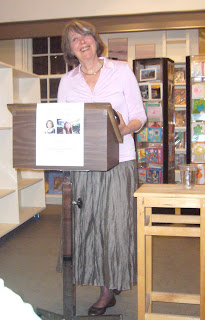 And so, to Meira. Her writing began with journalism, but that changed when she immigrated to Canada. She became a well-respected and award-winning poet. After her reading, someone in the audience asked why she decided to write a novel. Part of her answer was 'It was a challenge'. I could relate to that!

I've heard advice suggesting all novelists should write poetry in order to improve their prose. Yes, I do dabble, on occasion. The thing is that, reading Meira's book and listening to her read reminded me of Ann Michaels. Years ago a friend and I went to the Harbourfront Reading Series where she was appearing in what must have been her first public reading of 'Fugitive Pieces'. A little way in, we looked at each other and opened our eyes. Such wonderful, wonderful prose.

Being fairly skint at the time, I didn't buy a hardback copy and get her to sign it for me, but waited for the paperback version. A mistake, because that would have been valuable. So, in order not to make the same mistake again, I bought a copy of Meira's book and got her to sign it for me.

And now, at last, here's the recipe for cucumber raita to go with breyani mentioned in 'Cape Town':

Peel and chop some cucumber into fairly small cubes. Add yogurt, chopped (or dried) mint and salt and pepper. Mix well.
Posted by Brenda at 7:58 AM