Actually, I'll deal with one today and another on Friday, when I post again.

So, readers, and especially friends and acquaintances, want to know how much of 'Cape Town' is autobiographical. The truth is, some of my experiences play into the narrative, but so do a few other peoples'. Then of course, much can be attributed to my imagination. Most of it, probably. Although  'Huis Marta' exists. Not the name, but at least, as far as the situation and building is concerned. What goes on there, I have no idea. But I used to park outside while our elder son went to his weekly flute lesson.

Sitting in the car one day, the guy with the chipped nail varnish came along. However, Renee's reaction wasn't to the situation wasn't mine.

There are two scenes which come very close to being autobiographical. They are when Renee has her dance class. Here's an actual photo of one of mine. I took it, so you can't see me! And of course, this wasn't at the U.C.T. School of Ballet, but at the Royal Ballet School at White Lodge in Richmond Park, England. 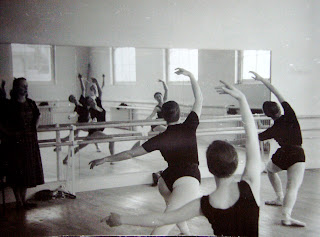 And the second? That's the wedding presided over by Desmond Tutu. The invitation came via my husband, not me, but I have to say the marriage ceremony and the reception afterwards was a very special event in my life. Just as it is in Renee's.
Posted by Brenda at 8:15 AM